Boku wa Misaki Taro (ボクは岬太郎, boku wa misaki tarou), translated as I am Taro Misaki, is a special short story originally published in the shonen magazine Fresh Jump by Shueisha in 1984 in two parts, the first on the May issue and the second on the June issue. The story focuses on the character Taro Misaki after he left Nankatsu, but before he travels to France in the original series.

The story was later re-published in 1985 as one of the stories in the special magazine Captain Tsubasa Netto Special and in 1987 in a special single tankobon.

In this story, Taro is in a new region of Japan while his father, Ichiro Misaki, has a painting exhibiton. His father is getting prepared to travel to France in order to improve his skills. In the exhibition, Ichiro meets his former wife Yumiko Yamaoka, who requests to take care of Taro while his father is in France. Meanwhile, Taro has made new friends in a new football team and after his friends' mothers pick them up he wonder how her mother would be. Ichiro relates his encounter to Taro and informs him that he wants him to stay with Yumiko since he feels that Taro has a big talent for football and thinks that he has been unable to raise him properly. Next day, Taro has a football match in which he shows his talents and kindness at the same time by making it possible for one of his friends to fully play football despite the protest of her mother. When Taro and his father get to her mother's house in Yokohama, the house of the family Yamaoka, Taro caughts a glimpse of her mother, being this the first time that he sees her, and is happy to see that she is just as she imagined her. As his father prompts him to go inside, Taro stops him and happily crying tells his father to leave the house, as he has decided to go to France with his father, and telling him "I'm... I'm still Taro Misaki, not Taro Yamaoka. I am Taro Misaki." As the story ends, Taro leaves for France.

This story was adapted in the original Captain Tsubasa anime series in episode 66 "Europa Hatsu Tsubasa-kun e" (ヨーロッパ発翼くんへ, translated as "Departure for Europe, to Tsubasa"), more commonly known in English as "The duel". 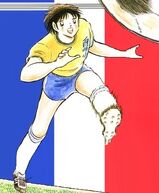 Retrieved from "https://captaintsubasa.fandom.com/wiki/Boku_wa_Misaki_Taro_(1984)?oldid=46987"
Community content is available under CC-BY-SA unless otherwise noted.