Name in other regions[]

Tsubasa Ozora is a young Japanese Elementary school student who is deeply in love with football and dreams of one day winning the FIFA World Cup for Japan. He lives together with his mother in Japan, while his father is a seafaring captain who travels around the world.

Tsubasa Ozora is known as the "Soccer no Moshigo" which translates as "heaven-sent child of soccer". When he was only barely a year old, he was almost run over by a rushing bus while playing with a football. However, Tsubasa had held the ball in front of him which served as a cushion for most of the impact. The force of the bump blew him away, but he was able to right himself over again with the ball. Hence, Tsubasa Ozora's motto of "The ball is my friend". Ever since he was little, he always went out with a football. His mother now having concluded that he was indeed born only to play football. At a very young age, Tsubasa Ozora already has amazing speed, stamina, dribbling skills and shotpower, astounding anyone who sees him play.

At the beginning of the story, both of them move to the city of Nankatsu , a town well-known for their talented high school football teams, and where Tsubasa meets Ryo Ishizaki, a football-loving young student who often sneaks out from his mother's public bathrooms and chores in order to play football, Sanae Nakazawa (also known as Anego), a young enthusiastic girl who also loves football and helps cheer the Nankatsu elementary school team on, and Genzo Wakabayashi, a highly talented young goalkeeper whom he soon challenges to a game in Nankatsu's annual Sports Festival. He also meets Roberto Hongo, one of the best Brazilian football players, who is a friend of Tsubasa's father, and who arrives in Japan and starts living with Tsubasa and his mother. Roberto becomes a mentor to Tsubasa and helps him to harness his football skills, convincing him to join Nankatsu Elementary and its fledgling football team, which Roberto coaches later as he passes his techniques onto Tsubasa.

Tsubasa also meets Taro Misaki, who has travelled around Japan due to his father's job and soon joins Nankatsu, and the two become the best of friends in both the pitch and real life, forming a partnership soon to be renowned as the "Golden Duo" or "dynamic duo" of Nankatsu. Soon Tsubasa and his Nankatsu team start taking on the best of school football, meeting such talented players as Kojiro Hyuga, Ken Wakashimazu, Jun Misugi, Hikaru Matsuyama, and many others. His Nankatsu squad wins numerous youth national championships, and wins the U-16 World Championships for Japan, before leaving the country to play in Brazil.

Tsubasa leaves Japan for Brazil, and starts playing, with his mentor Roberto as the manager, for São Paulo (F.C. Brancos in the anime), in Brazil's premier professional league, Campeonato Brasileiro Série A, winning the final against Flamengo (F.C. Domingos in the anime), 4-3. While in Brazil, Tsubasa gets to meet several talented Brazilian players, such as his teammate and roommate Pepe, who comes from humble backgrounds to become one of the primary playmakers in the squad along with Tsubasa, and Flamengo playmaker Carlos Santana, a prodigious talent.

Enthusiastic football-loving youngster Shingo Aoi, whom Tsubasa once played against while in the high school national championships, leaves Japan to play football in Italy, where he hopes to play for a major Italian professional team. After arriving in Italy, however, Shingo gets tricked by a man who gives him fraudulent promises of getting him selected for an Italian team, but after Shingo is taken to a badly-furnished field, the man runs away, stealing all his money in the process. Shingo realizes that he is swindled, and tries hard to get his money back, doing such jobs as shoeshining, and his enthusiastic attitude catches the eye of one of the coaches of Inter Milan (Intina in the CTJ Anime), who sign him to play for their squad as an attacking midfielder.

The Japan's youth side plays the first phase of AFC Youth Championship without Taro Misaki, Makoto Soda, Hiroshi Jito, Shun Nitta, the Tachibana brothers Masao and Kazuo, and Kojiro Hyuga. After Tsubasa, Wakabayashi and Shingo join the team, it defeats Thailand 5-4 after being 4-1 down at one stage. In the second phase Japan beats Uzbekistan 8-1, China 6-3 and Saudi Arabia 4-1. In the semifinals Japan beats Iraq 3-0. The Japanese win the Asia Youth title beating South Korea 2-0 and qualifying for the FIFA World Youth Championship.

In the first phase Japan defeats Mexico 2-1, Uruguay 6-5 and Italy 4-0. In the quarterfinals, they beat Sweden 1-0 and Netherlands 1-0 in the semifinal. The Japanese win in the "Great Final" the World Youth Championship, defeating Brazil 3-2 after extra time with Tsubasa scoring a hat-trick and the golden goal despite the fact that Brazil used a new player at the extra time called Natureza, who became the third person to score a goal on Wakabayashi from outside the goal area - the first being Karl Heinz Schneider of Germany, and second being Sho Shunko of China.

While Tsubasa moves from São Paulo (Brancos in the anime) to Barcelona (Catalunya in the anime), Kojiro Hyuga is bought by Juventus (F.C. Piemonte in the anime). Tsubasa plays very well in training, displaying all his skills, but the Dutch coach Van Saal (Edward in the anime, inspired by Louis van Gaal, who coached Barcelona at the time) demotes him to FC Barcelona B, the reserve team that plays in the second division, because Tsubasa and Rivaul (inspired by Rivaldo) cannot play together whilst Rivaul holds a key position for playmaking.

Meanwhile, Kojiro Hyuga plays for his first game for Juventus (Piemonte in the anime) against Parma in the Italian Serie A, but does not score because of his physical imbalance. Juventus coach Carlo Monetti replaces him with David Trezeguet (David Tresaga in the anime), who scores the winning goal as Juventus beat Parma 1-0.

In Germany, Genzo Wakabayashi and his Bundesliga team, Hamburger SV (Grunwald in the anime version), play against Bayern Munich (Routburg in the anime version), led by Karl Heinz Schneider. Wakabayashi makes many great saves, impressing players and coaches from both teams. But in an attempt to win at the final moment despite the coach's decision to aim for a draw, Wakabayashi left the goal area to take a free kick shoot that was stopped at the last second, which give Bayern a chance to counter attack on an undefended goal, allowing them to win 2-1.

In Spain, La Liga championship begins and the match between Barcelona (led by Rivaul) and Valencia (San Jose in the anime) (who have just bought Tsubasa's old rival Carlos Santana) ends 2-2. Tsubasa watches the match from the tribune (in the anime version Tsubasa plays as a substitute the match and scores a goal).

In the 2nd stage of the Japanese J. League, Júbilo Iwata, led by Misaki, Gon Nakayama (inspired to real player Masashi Nakayama), Ishizaki and Urabe, defeats the Urawa Red Diamonds led by Igawa and Sawada 2-1. In others J. League matches, F.C. Tokyo led by Misugi draws 1-1 with Consadole Sapporo led by Matsuyama. In Italy Hyuga and Aoi are bought respectively by Reggiana and Albese.

In Spain, Tsubasa plays three matches with FC Barcelona B and he records 12 goals and 11 assists in three matches. Tsubasa is inserted in the Barcelona lineup because of an injury to his rival Rivaul and the disastrous results of the Barça (one point in four matches), and plays the Súper Clásico against Real Madrid, who have just bought his old rival Natureza. Tsubasa ends the match with three goals and three assists and Barcelona wins 6-5. 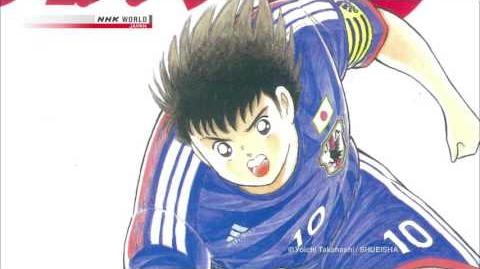 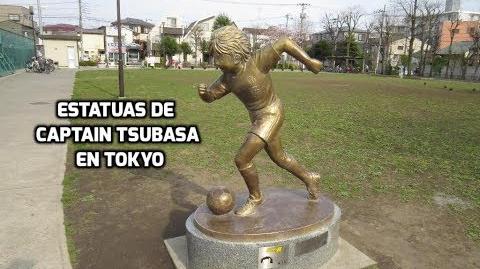 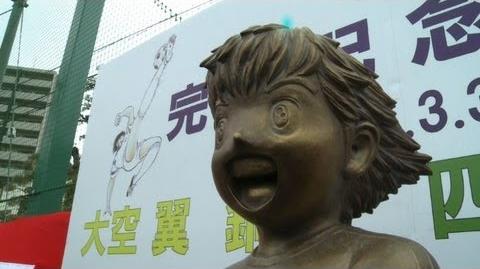