Originally published as an independent story five years after the original series ended with the title Captain Tsubasa: Tokubetsu Hen (キャプテン翼 -特別編-, Captain Tsubasa: Special series), it was later placed as part of the World Youth series when collected in tankobon on 1996-04-09, where the art had some retouches and two additional pages, chapter "Act. 11", which are noticeable different from the rest of the comic due to Takahashi's new drawing style. It is in these additional pages where Brian Cruyfford is introduced in this story in the manga version (he debuted in the film version for the first time in the Captain Tsubasa universe and in World Youth Hen in manga form priorly). Since then, it's the first story of the "Battle of World Youth" arc.

This manga marked the return of the Captain Tsubasa series for the first time. The original series had ended five years prior and the OVA four, with only the Tecmo videogames continuing. The return of Captain Tsubasa in manga form was motivated by the dawn of the J. League in 1993, for which the original series had played a very important role in increasing the popularity of football in Japan. Yoichi Takahashi, who was then working in the serialization of Chibi, created this story in that same year and its success led to World Youth.

The compiled volume was released on 1996-04-09 with the name Captain Tsubasa: World Youth Tokubetsu Hen - Saikyo no Teki! Holanda Youth by Shueisha.

This tankobon includes the manga: 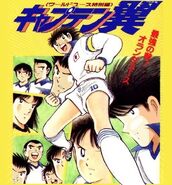