Captain Tsubasa IV is a direct sequel to Captain Tsubasa III: Kotei no Chosen also for the Super Famicom. It was originally released on 3 April, 1993. The game focus on Tsubasa Ozora as he steps into the professional world.

Compare to its predecessors, the gameplay of Captain Tsubasa IV is mostly unchanged. However, it introduces a new feature - multi-scenario, in which the story will go in different directions depending on the result of certain matches.

Below are the four possible routes in the game.

After winning the Latin America Cup, Tsubasa triumphantly returns to Japan and then participates in the Jairo Cup, a tournament held to commemorate the great achievements of the legendary striker Jairo. Here, Tsubasa faces the task of improving his Cyclone.

After losing the Latin America Cup, Tsubasa and Sao Paulo travels to Europe to challenge strong European clubs before participating in the Soccer Grand Prix. Tsubasa learns about the severeness of the professional world as well as the level of European leagues in this route.

After winning against Milan in the campaign in Europe, Stratto decides to return to Italy in order to start over in the Italian league. Meanwhile, Tsubasa and Ishizaki return to Japan, joining Scudetto Japan to participate in the Super Japan Cup. After that, Japan takes part in a friendly tournament with some other countries.

Despite losing to Milan in the campaign in Europe, Stratto manages to overcome the burden from his past and decides to return to Italy. Tsubasa and Sao Paulo takes part in the World Club Cup, where they eventually have another chance against Milan - this time with Stratto on Milan's side. They also have to face Japanese club selection as their last opponent.

The sequel, Captain Tsubasa V: Hasha no Shogo Campione, continues from this route, making it canon to the Tecmo series. 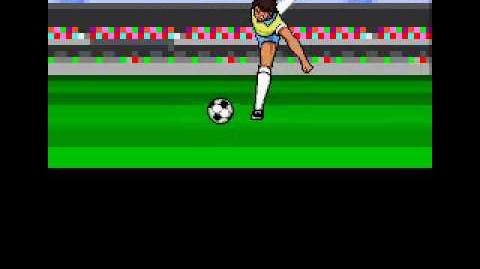 Coimbra
Add a photo to this gallery

Schumach
Add a photo to this gallery

Retrieved from "https://captaintsubasa.fandom.com/wiki/Captain_Tsubasa_IV:_Pro_no_Rival-tachi?oldid=52762"
Community content is available under CC-BY-SA unless otherwise noted.