Daichi Ozora (大空 大地, Ozora Daichi) is the little brother of Tsubasa Ozora, who was introduced in the Holland Youth Special.

He first appeared in Battle of World Youth chapter 6. As Tsubasa's little brother, Daichi was born in-between the time his big brother moved to Brazil, after finishing his Junior High graduation. Daichi has grown up watching all the soccer matches of his big brother on TV and adores Tsubasa, to whom he is very proud.

Since an early age, showed talent with his individual skills in football. At the age of 5, he was chosen to be part of Nankatsu elementary school while he was still in kindergarten.

Daichi (大地) means "great earth" —his mother chose this name in order for him to stay in the same land as her, since Kodai departs frequently to the seas and his elder son Tsubasa has departed with his "wings" to become an overseas pro soccer player. His name is, however, also very widely accepted as a pun, seeing as his surname Ozora (大空) means "great sky".

As a football player, Daichi is developing a leg with a powerful shot, which balances with his clean and technical feats with his dribble and feints. He has shown a talent similar to his big brother and has good ball control, but he has not been shown playing very much in the series thus far. 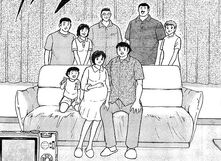 The Ozora-Nakazawa family. Daichi at the Bottom left. 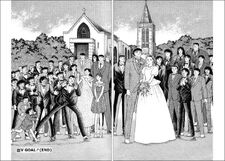 In his brother Tsubasa 's wedding.
Add a photo to this gallery
Retrieved from "https://captaintsubasa.fandom.com/wiki/Daichi_Ozora?oldid=54936"
Community content is available under CC-BY-SA unless otherwise noted.