Grandios (グランディオス. gurandiosu) is a Spanish midfielder who is the captain and volante of FC Barcelona.

Grandios first appears in Road to 2002 chapter 16. He has good judgement, and is trusted by his teammates. He is based on real life player and coach Josep "Pep" Guardiola i Sala.

In the match against Rayo Vallecano, Grandios made a mistake by missing a PK. This event weakened his morale, and the match ended up with a reversal defeat for Barcelona. However, he recovered when Tsubasa joined the top team.

With his team, FC Barcelona, he is able to win the cup of LaLiga. He is now part of Olympic Spain for the Madrid Olympics Tournament. 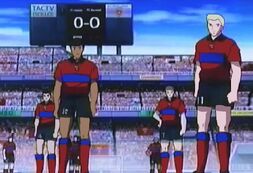 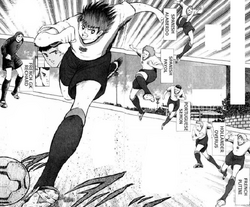