Kumi Sugimoto (杉本久美, Sugimoto Kumi) is the 2nd assistant manager in Nankatsu middle school during the Boys' Fight arc. She also appears in the Holland Youth Manga Special and was supporting Nankatsu until the Golden Generation ended high school.

Sugimoto first appeared on Captain Tsubasa (1981) chapter 51. She is a kouhai (underclassman) of the rest of the Nankatsu gang, attending first year of Middle School whereas near everyone else in the team attends third year. She has a somewhat naïve and straight-forward personality. In all her apparitions she is also energetic, plucky and relentlessly cheerful.

She has brown/dark brown hair and wears two ponytails, which are shorter than Yukari (longer in the 1983 anime). In the Battle of World Youth saga, she cuts her hair short after the Asian preliminaries arc, apparently to offer it as a token for her fortune telling.

In Captain Tsubasa (2018 TV series), Kumi has light brown hair, caramel brown colored eyes and long hair locks coming from both sides of her ears. Her eyes are very large and shiny, reflecting her cuteness and naivete.

She is a friend and kouhai of Sanae, with whom she does not only share her love of football but also the love with Nankatsu's captain, Tsubasa. She's a bit more straight-forward than Sanae, and she does confess her feelings to Tsubasa before Sanae does, but he quietly turns her down and confesses that he does indeed love Sanae. Kumi tells him that she already knew that, but confessing her feelings helped her to clear her doubts. She goes as far as to warn him to hurry to declare to Sanae (since she learned that his potential love-rival, Koshi Kanda, was around her at the time).

After this incident, she continued to encourage Nankatsu middle school, Nankatsu high school, and the All Japan Youth team, and is usually part of the supporters in the national selection team. She was worried for the J-boys fate at all times and was normally accompanied by her grandmother, who is a fortune teller. She's quite sensitive to predicting or anticipating some events during the series, until Yukari told her to stop that and be more possitive towards the team after the quarter-finals between Japan Youth and Sweden.

After the match against Hanawa
Add a photo to this gallery 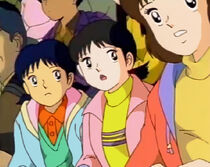 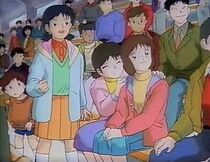 (Film 5)
Add a photo to this gallery 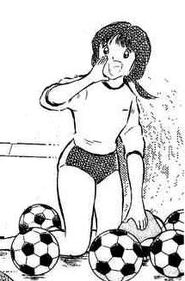 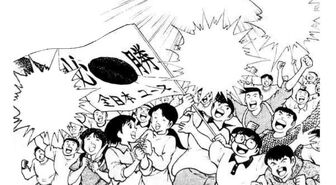 As a Japanese supporter
Add a photo to this gallery
Retrieved from "https://captaintsubasa.fandom.com/wiki/Kumi_Sugimoto?oldid=65058"
Community content is available under CC-BY-SA unless otherwise noted.