Yukari Nishimoto (西本ゆかり, Nishimoto Yukari) is a supporter of Japan and a kindergarten teacher.

She is a minor recurring character in Captain Tsubasa. She lives in the city of Nankatsu. She used to go to school with her friend Sanae Ozora and boyfriend Ryo Ishizaki.

Nishimoto used to be the third manager of Nankatsu along with Sanae Nakazawa and Kumi Sugimoto. Yukari is the cousin of Hiroshi Jito, who protected her when both were in their elementary school.

For three years, Yukari was appointed as the 2nd assistant manager of Nankatsu middle school football club. She eagerly helped Sanae in her chores, as well as noticing the deep love her friend felt for Tsubasa Ozora. She later on also supported her kouhai Kumi Sugimoto since both Sanae and Kumi were truly in love with Nankatsu's captain and champion, and expected to see who was to confess to him first just after the end of the Jr. World Youth in France.

After Nankatsu lost 1:2 against Toho in the finals, Yukari left the soccer club as assistant but appeared together with Sanae and Kumi as supporters for All Japan Youth friendly matches against Netherlands Youth, with a special (and comic-relief) cheering to Ryo Ishizaki.

After failing the junior college tests, Yukari enrolled in a Kindergarten (幼稚園 yōchien). She supports Sanae in her depresion for not being able to see Tsubasa for a 3-year time period, encouraging her to go to Brazil to visit Tsubasa for a short while. She and Ishizaki share some held gazes from time to time, hinting at their feelings being more or less mutual.

In the Brazil vs. Japan finals, she's extremely worried for Ishizaki when he gets severely hurt trying to stop Santana and must be taken out of the field. As she takes care of him, he catches her holding on his hands and she pulls away, blushing and then calling him a fool. Ishizaki tells her that he knows he won't be able to play for too long since he must take over the family's business; he asks Yukari if she'll still go out with him despite this, and she says she will.

Yukari helped Sanae Ozora with her pregancy - as she was expecting twins - together with Natsuko Ozora in the Ozora's house in Nankatsu City, since Tsubasa was captain for Olympic Japan in the Madrid Olympics.

She is a tall young lady, slimmer and taller than Sanae and Kumi. She is also shown to have a more mature appearance, especially regarding her eyes (they have smaller pupil/irises compared to the other two girls). She wears a ponytail in the manga and the 2018 anime, but in the in the 1983 anime and in the 1994 OVA she has girlier pigtails.

In the 1983 TV series, she is very supportive to Sanae for confessing to Tsubasa. She likes to joke around and has an easy-going personality, noted to be rather outspoken compared to other girls.

In the manga and in the 1994 OVA she has a tsundere personality (careless of whether she finds a boyfriend or not), but starts a sort of "love-hate" relationship with Ryo Ishizaki: they tease each other a lot in the Holland Youth Special movie, and they properly confess to one other in the final match of Japan Youth vs Brazil in the Battle of World Youth saga.There are some early hints of her tsundere traits in her first appearance in the 2018 series, where she and Ishizaki comically scream at one another.

She's love interest of Ishizaki, since they had some funny teasing to each other in the Holland Youth Special and shared some gazes in World Youth. However, at the end of World Youth, after Ishizaki suffered a heavy injury from Santana to his face, he was sent to the infirmary and Yukari stayed with him. As said above, Ishizaki took the chance to confess to Yukari that he had fallen for her; Yukari accepted said confession and soon afterwards they started a romantic relationship. 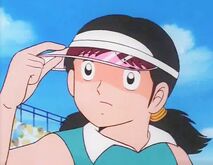 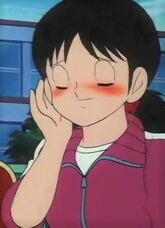 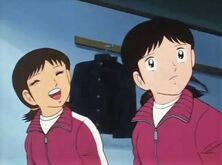 Kumi & Yukari
Add a photo to this gallery

Ready for the finals

Tsubasa recovering after the 3-4 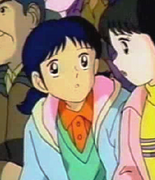 (Film 5)
Add a photo to this gallery

In the match against Otomo

Supporting Tsubasa for the 4th goal

Nankatsu as V3 champions
Add a photo to this gallery 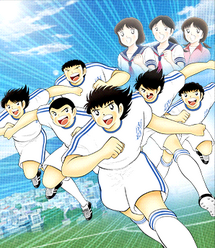 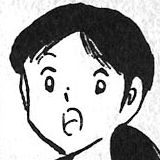 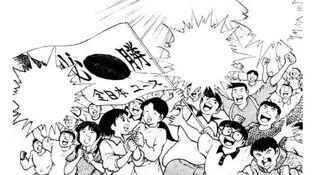 As a Japanese supporter
Add a photo to this gallery

Retrieved from "https://captaintsubasa.fandom.com/wiki/Yukari_Nishimoto?oldid=56580"
Community content is available under CC-BY-SA unless otherwise noted.